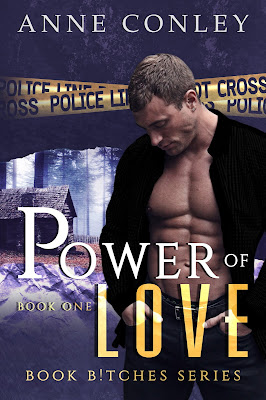 Welcome to Mystic, Texas, where the past stays alive in more ways than one.

Vanessa Power, a budding Indie Romance author, believes the town is calling her name, being the new life and fresh start she’s craving. She’s met an amazing group of women who have a regular book club, reading only Indie Authors. Unfortunately, her new house is in worse shape than she thought and holds more mysteries than she’s prepared for. And then there’s the handyman.

Linc Patterson holds more mysteries than her house and the town combined, with a past he won’t reveal in a package which is built for nothing short of sin.

Linc is captivated by his new boss, the only person in town who will give him a job, but only because she doesn’t know he’s an ex-con. Can he keep his past locked away, while at the same time indulging in his fantasies with the pleasantly curvy and deliciously sexy Vanessa? Probably not.

They are both looking for a new start in life. Will they be able to find it together? Or will something sinister keep them apart? 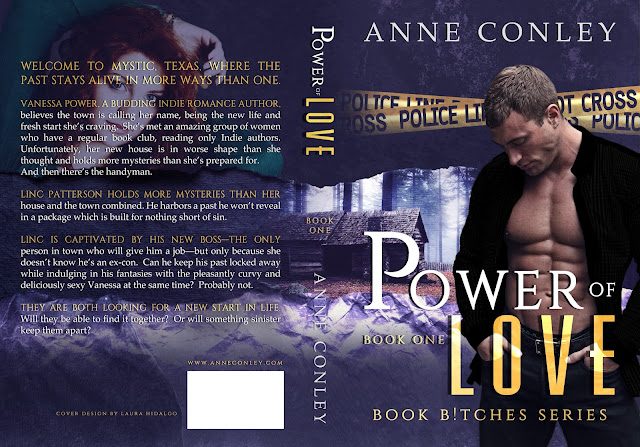 “I wish I could watch him fix my house up all day.”
“Aren’t you married?” Kristie pointed out, to which Melanie only shrugged.
“Married.  Not dead.”

Vanessa blushed. “Yeah, he says he can fix it. It’s going to take a while though,” she hedged.

“Of course it will. You’re in the Evan’s place? He may need to rebuild it, that would take years,” Wren was grinning widely at her, and Vanessa had to admit the thought had crossed her mind.

“Yeah,” she repeated feeling a little stupid. “He’s certainly not hard to look at.”
Giggles and murmurs of ‘you get him girl’ echoed around her. “But doesn’t he have a girlfriend?” She remembered Cindy at the hardware store and the giggling in the background when she’d called.

Samantha wore a rare frown. “She’s temporary. You’re way better than she is.”

Okay, so there was a history here, and she was apparently the new piece of it. She wasn’t sure how she felt about that. Before she could wrap her head around it, the living room turned into chaos.

Wren’s wine glass flew out of her hand and spilled all over Kristie’s linen, issuing a shriek from the woman. “Dammit! Sam, can you get control of Addison? She does this shit every time I come over.”

“Never at your house again.” Kristie rubbed frantically at her blouse, muttering very unladylike curses under her breath.

Vanessa was looking around for other people in the house, children maybe, she couldn’t see for some reason. Then she realized what she was doing. Looking for invisible kids. Nothing had touched Wren’s wine glass.

“Who is Addison?” She almost didn’t want to know the answer, especially after remembering the lotion incident.

“She’s my ghost,” Samantha said blithely as if nothing out of the ordinary had happened.

The words were spoken with so many undertones, Vanessa couldn’t comprehend them all at once. One, that it was obvious she had a ghost. Like a pet. Like everyone had one. Like it was normal. Vanessa took a sip of wine, trying not to jump to the conclusion her new friend was a few French fries short of a happy meal.

“Cool,” she said noncommittally, even though her mind raced with the events she’d felt at her own home. Walking around with cobwebs, cool hands… was that a ghost? No. No ghosts in her house. Her house was going to be an awesome home someday. She hadn’t signed up for ghosts.

Tiffany took a massive bite of sandwich and then spoke around her mouth full of food. “You probably have one too. They’re everywhere here.”

“What do you mean?” They were all nuts. But at least they seemed harmless. At least, that’s what people said until they pulled out the box of candles and live chickens. Her eyes darted around, looking for someplace to keep wildlife. It didn’t look like there was any place to store a sacrifice and she didn’t see a Ouija board anywhere…

“This town is built on some sort of fault line to the underworld,” Wren said. “The veil to the other side is thin in Mystic.” She shrugged, as if she hadn’t just spoken lines straight off a horror movie trailer. “You get used to it.”

Vanessa tried not to roll her eyes, even if this was a bunch of mumbo jumbo.
“Okay.” She hoped.

“I’ve got a ton of them at the museum. I think they come in with people’s stuff,” Kristie was trying to get the wine stain out of her pants. “But mine are way better behaved than Addison. Jesus. That girl will be the death of me.”

Vanessa took it all in stride, or at least she tried to. A haunted town? Not wanting her new friends to think she wasn’t a team player, she asked, “So, does every place have one?”

Melanie shrugged. “Yeah. Most of them, anyway. It takes a while with new places for them to imprint themselves.” Damn. She’d had high hopes for Melanie being the sane one—the voice of reason in the madness.

“So, what do they do? Mess with electrical stuff? Make people crawl on ceilings?” An uncomfortable laugh erupted from Vanessa, and she tried to hide it with stuffing a piece of cheesecake in her mouth.

“No, not really.” Kristie was still patting at her stain. “They just hang around. You can tell they’re there by the way they smell, sometimes they touch you and stuff. But Addison is a damn poltergeist, and she’s a total bitch.”

“So, they’re not out to get you or anything?” She was trying. Really.

“Hell no! I love mine,” Wren replied.

“Mine came with me when I moved here,” Tiffany offered. “He wasn’t around when I lived in Dallas, but when I moved here, he must have done what Kristie said, and come with my stuff, because something here makes him stay.” Her voice was funny, but Vanessa didn’t pry. It sounded like she had known her ghost in real life, and talking about it made her want to cry.

“The Pint has an old saloon girl. She pinches the guys’ butts and such. She likes to push couples together,” Sam was getting into it, her voice taking on a sing-songy quality, like any great story-teller. “The story goes, she was in love with the Sherriff, but he wouldn’t have her, since she was a lady of the night, and she hung herself.”

“Are they all attached to horrific stories?” Vanessa didn’t want to think about something awful happening in her home. She was still desperately trying to think of it in those terms, even though it didn’t look homey at all.

“No. Most of them are just old, dead people. That’s what mine is. I named her Kitty. I have no idea where she came from, but she’s there now. Smells like White Shoulders.” Kristie giggled like a kid, apparently having gotten over her anger at Addison.

Vanessa’s mind spun, wondering if she had a ghost, or if these women were total nut cases. Dear god. All her new friends were Looney Tunes. 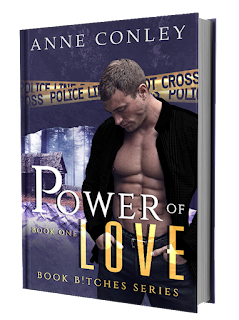 Anne has written her entire life and has the boxes of angst-filled journals and poetry to prove it. She’s been writing for public consumption for the last four years. Currently, shehas four romance series. In Stories of Serendipity, she explores real people living real lives in small town Texas in a contemporary romance setting. In The Four Winds, she chronicles God’s four closest archangels, Uriel, Gabriel, Raphael, and Michael, falling in love and becoming human. In Pierce Securities, she gives us Ryan, Evan, Miriam, Zack, Quinten, and Simon. Her newest series, Book B!tches, is all about a group of women in Mystic, Texas who get into all sorts of shenanigans. She lives in rural East Texas with her husband and children in her own private oasis, where she prides herself in her complete lack of social skills, choosing instead to live with the people inside her head. 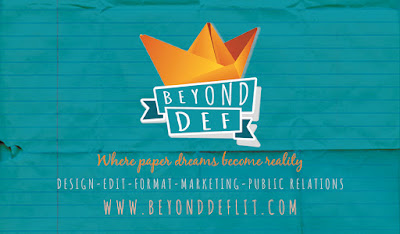