Lost in Wonderland
The Twisted and the Brave #1
Nicky Peacock

Monsters, serial killers, and imaginary friends—
being a Wonderlander can be murder... 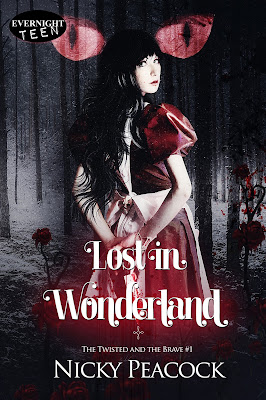 Once upon a time, Kayla was lost. Then she found Wonderland, but not the one you know. Run by ex-government agents and funded by an eccentric Silicon Valley billionaire, this Wonderland is the name of a collective of highly trained vigilantes who hunt serial killers. Now Kayla, aka Mouse, works tirelessly alongside her fellow Wonderlanders, Rabbit and Cheshire, baiting dangerous murderers. But even her extensive training hasn’t prepared her for the return of her older brother…

Shilo has spent most of his life in an insane asylum, convinced his mother was abducted by a sinister Alaskan monster who lures the lost away to feast upon their flesh. And now he’s certain that his sister is in the same monster’s crosshairs. But if Shilo is going to save what’s left of his family, he’ll have to convince his sister that maybe, just maybe, we’re all a little mad.

14+ due to violence and adult situations

About the Author:
Nicky is a published author of both YA and adult urban fantasy, paranormal romance and horror fiction. She lives in the heart of the UK, where she has run a writers' group for over 4 years to help new writers find their feet on the path to publication. A member of both the Society of Authors and the British Fantasy Society, Nicky has had over 30 stories published in various anthologies. She loves to talk to readers, so please feel free to either get in touch with her through her blog, or on any of the social media below.